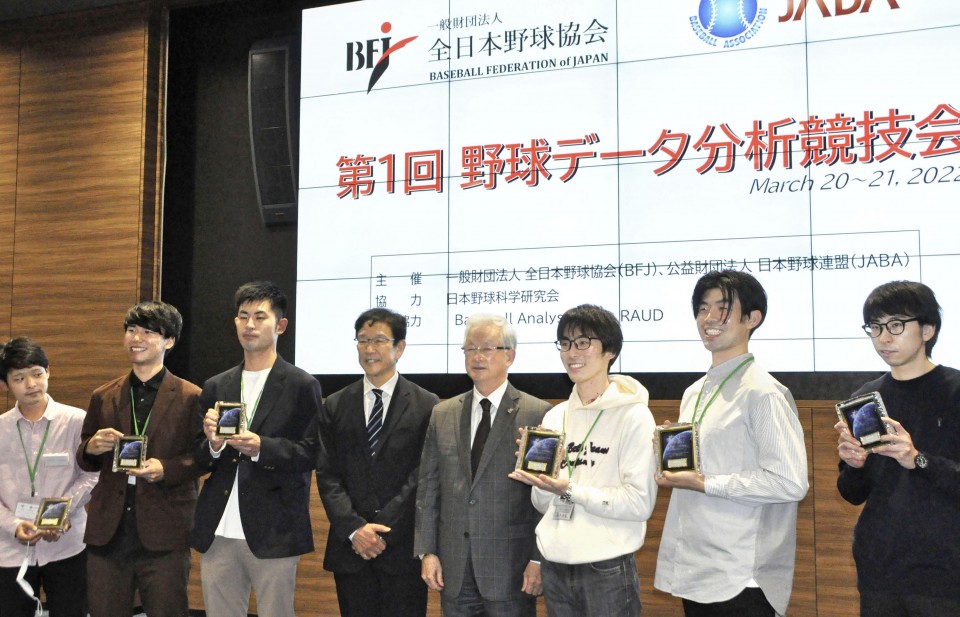 Samurai Japan manager Hideki Kuriyama (4th from L) poses for a photo alongside participants of a baseball analytics competition on March 21, 2022 in Tokyo. (Kyodo)

Samurai Japan manager Hideki Kuriyama marks a transition in national team leaders due to his established willingness to go beyond the orthodoxy that holds great sway over the game in Japan.

Kuriyama was hired to manage at next March’s World Baseball Classic and hopefully guide Japan to its first title since winning the first two WBCs in 2006 and 2009.Samurai Japan manager Hideki Kuriyama speaks to reporters on May 14, 2022, in Kawasaki, near Tokyo. (Kyodo)

His appointment represents a fusion between the national team’s first trend, to rely on experienced managers from 2006 to 2013, and its second to go for new ideas from managers with little or no experience.

After 10 years at the helm of the Pacific League’s Nippon Ham Fighters, during which he won two league titles and one Japan championship, Kuriyama established a track record as someone who is unbound by convention.

Although most famous for overseeing Shohei Ohtani’s development as a two-way player in a Japanese baseball world resistant to change, Kuriyama, in the lean years after the Fighters’ 2016 Japan championship, has thrown open the doors to innovation.

The Fighters were the first Japanese club in recent years to adopt the kind of aggressive defensive shifts that have become ubiquitous in MLB.

Kuriyama’s Fighters also experimented with their starting pitchers to keep those with limited arsenals from becoming overexposed by facing too many hitters in a game.

The skipper was the first Japanese manager to regularly employ an “opener,” a quality reliever in the first inning to take on the top of the opposing lineup, and added a variation, the “short starter.”

Instead of having his starting pitchers stay on the mound until they become ineffective or had thrown a game’s worth of pitches, Kuriyama divided his starters into groups.

Some starters were allowed to go through the opposing lineup twice, others, his short starters, would only face up to nine batters per start.

In March, Kuriyama attended a baseball analytics symposium and competition in Tokyo. Teams of students impressed the skipper with their presentations, varying from a method to identify the ultimate forkball and establishing how Japan’s strike zone varies from MLB’s.

Afterward, Kuriyama suggested the analytics team supporting his players on the field at the WBC would be of prime importance.

“We must be compelled to keep searching until the very last minute for those who can help the team win,” Kuriyama said. “Someone of genius might well emerge from among people still in school.”

In May, Kuriyama got a closer look at Nippon Sport Science University two-way star Kota Yazawa and said he had wanted him for the national team in March.

Unfortunately, Taiwan’s national team pulled out of the planned series, denying the slugging pitcher a chance to suit up for Kuriyama’s Japan, with the skipper comparing him to Ohtani.

The youngster might still find himself on the national team in the November international friendlies Japan wants to play.