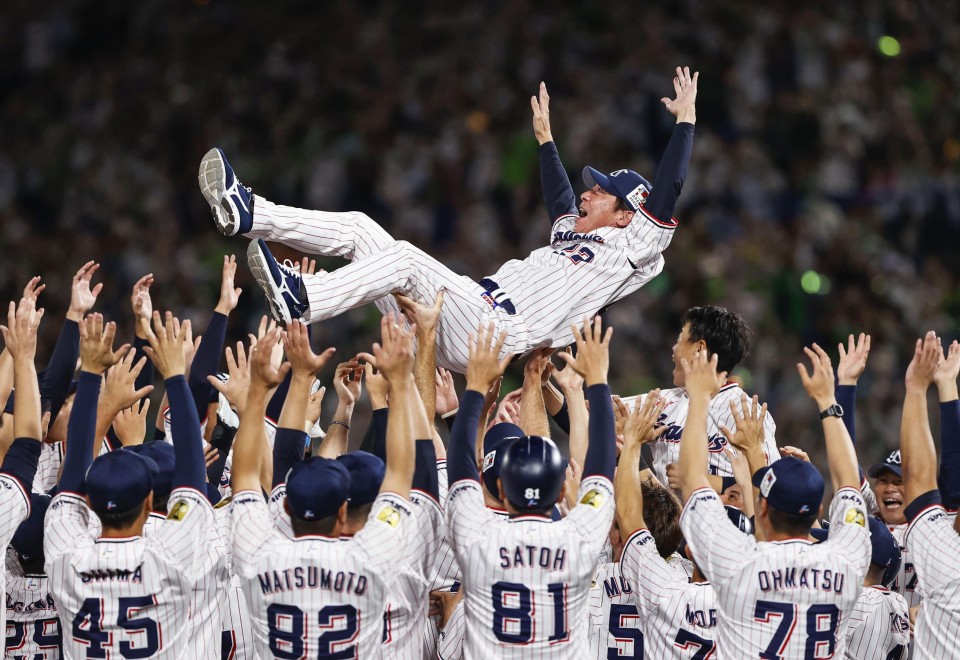 The Swallows clinched the title with six games left to play in their regular season and got to the final stage of the Climax Series playoffs, where they will play the winning team of the first stage for a place in the Japan Series.

Kazuya Maruyama, who replaced injured Domingo Santana in the right field in the top of the eighth, plated the pennant-winning run with a double off Edwin Escobar (4-2) with a runner on second and one out at Jingu Stadium.

“I’m as happy as all you fans,” said skipper Shingo Takatsu to the home crowd as the Swallows won the CL two straight years for the first time since 1993 when he was playing for the team.

“Winning once is difficult, winning two in a row is even more difficult. I want everyone to give the team a big round of applause.”

In a pitching duel, Yakult was held to a single hit by DeNA lefty Shota Imanaga, who struck out 11 over seven innings, through the first six innings. Two singles and a walk loaded bases in the seventh, but Kotaro Yamasaki grounded out with two outs.

Yakult’s Yasuhiro Ogawa hurled six shutout innings on two hits. DeNA had a runner on third with two outs in the eighth, but Shugo Maki struck out as the visitors also missed a huge chance to take the lead.

Slugger Munetaka Murakami went without a home run for the ninth straight game and remains one short of his 56th homer, which will put him alone in second on Japan’s all-time single-season home run list.

“He fought alone in July and led the team well. Congratulations to him,” said Takatsu in reference to the period when the team was hit heavily by COVID-19 infections.

“We still have a high mountain to climb, but we want to scale the real big one that is waiting after the Climax Series,” added Takatsu as Yakult looks to win the second straight Japan Series.

The Chunichi Dragons beat the Yomiuri Giants 7-1 in the other CL game.

The SoftBank Hawks shed their magic number to secure the Pacific League pennant to five with a 10-0 rout over the Lotte Marines, while the Rakuten Eagles blanked the Nippon Ham Fighters 6-0.