SAN DIEGO — Home run milestones continue to be the talk of Major League baseball as the regular season winds down.

Meanwhile, the St. Louis Cardinals’ Albert Pujols is two shy of joining the rarified air of 700 career home runs. Only three others have done that – all legends. Babe Ruth, Hank Aaron and Barry Bonds.

As of Wednesday, the Cardinals have 13 regular season games left for Pujols to join baseball’s 700 club.

Not chasing a number
Want to get on Albert Pujols’s bad side?

Mention to him, as sports writers constantly do, that he’s chasing 700.

“I’m not chasing anything buddy,” Pujols said at a packed dugout press conference before Tuesday’s game against the San Diego Padres. “I mean, that’s something that you guys are playing with it. I just, never chase any numbers and I accomplished so much. So, 22 years later I definitely [am not]going to chase anything.”

That ending always was going to be a fond but fairly sedate affair, with teams on the road honoring Pujols. The Padres did their part with a very San Diego gift of surfboards for Pujols and fellow retiree-to-be, St. Louis catcher Yadier Molina. 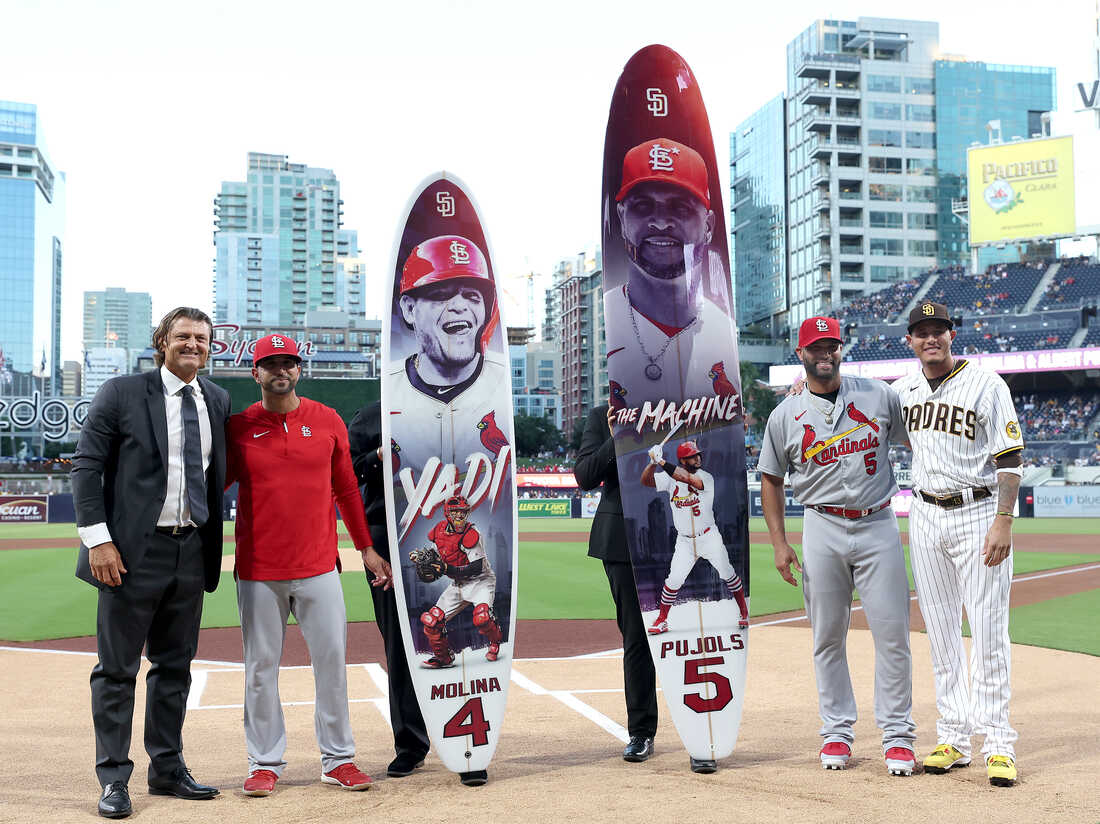 Retired MLB player Trevor Hoffman, St. Louis Manager Oliver Marmol, Albert Pujols and Manny Machado of the San Diego Padres pose for a photo with surfboards made to congratulate Yadier Molina #4 and Albert Pujols #5 on their pending retirements prior to Tuesday’s game in San Diego.

But Pujols has turned an easy going retirement tour into something electric, thanks to a home run barrage that ignited a somewhat sleepy final season.

He’s hit a dozen since August 10th, and it’s prompted reporters to use another phrase Pujols doesn’t like (– we just can’t get it right!! –) “power surge.”

“My power surge?” Pujols asked in the dugout with a wry grin, “Ok I guess I didn’t have any power – I had to surge for some.”

“Just taking the same swing that I start taking in spring training for a week that I was there, and carry that into the season,” Pujols continued, “and hopefully knowing that if I trust my process like I always have as a professional, sooner or later it’s going to come around. And I think that it took this long, I don’t know why. I think God has his ways to turn things around. But for me it was just [trying to]repeat the same swing that I’ve been doing for 21 years in my career.”

Pujols acknowledges his swing speed is better now than years past. He’s also been feasting on left handed pitchers , who’ve given up nine of his last twelve homers. Tuesday the Padres offered up only right-handed pitchers. They held Pujols to two singles and a walk that drew boos from the homer-hungry fans at Petco Park.

There’d be no lucky ones in the bleachers snagging a Pujols home run.

But high above the first base line, 36-year-old San Diegan Chris Wooldridge found himself perfectly positioned to catch the closest thing to history Tuesday night – an Albert Pujols foul ball.

“I just saw it pop up and it looked like it was coming right at me,” Wooldridge laughed, “and it was just so perfect. I didn’t have to move or anything.” 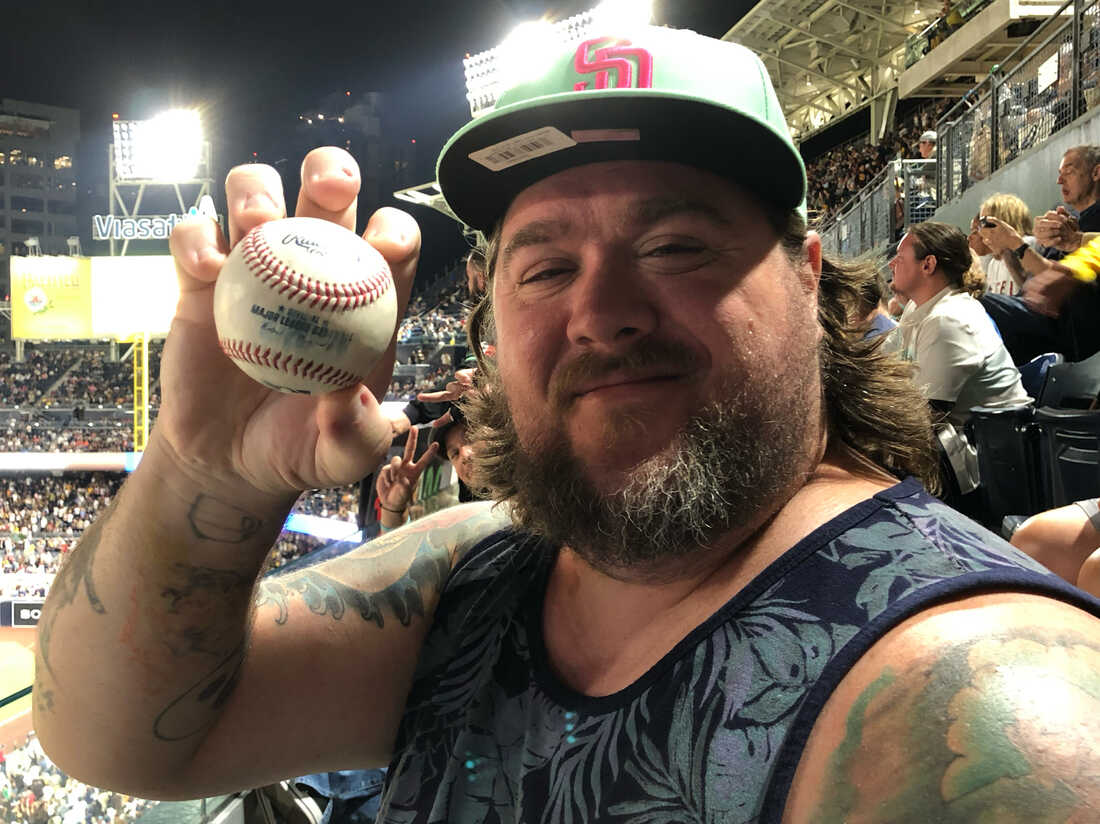 San Diego resident Chris Wooldridge hadn’t been to a Major League Baseball game in 15 years. But he picked a good one to see. He caught an Albert Pujols foul ball.

Wooldridge said he hadn’t been to a Major League game in maybe 15 years. He’ll remember this one, and a chance souvenir from a 42-year-old player finishing with a bang.

“It’s impressive,” he said. “I mean, you’re not supposed to be, y’know hitting as many home runs and playing at that caliber at that age. It’s just really, really special.”

And an absence of suspicion

There was a time, not too long ago, when a home run barrage by a 42-year-old would raise questions.

Not unreasonable questions to ask in San Diego, where Padres star Fernando Tatis, Jr. currently is serving a lengthy suspension after testing positive for a performance enhancing drug.

“Pujols has never had an issue ever in his entire career with anything,” Wooldridge said, “[he’s] been a stand-up player and role model and that’s just something to applaud.”

There’ve been no credible allegations against Pujols nor has he had the outlier performances – he never hit 50 home runs in a season. His major league career began in 2001, during the so-called steroid era and the same year Barry Bonds’ 73 home runs set the single-season record but cast doubt on that and other records.

But Pujols has played most of his baseball since the game’s become a standard-bearer in the fight against sports doping.

“The light switch went on in baseball,” said U.S. Anti-Doping Agency CEO Travis Tygart. “And they put in a policy that protects clean athletes.”

Indeed, it’s striking to note the absence of suspicion, among fans and sports journalists, about both Pujols’s march toward 700, and Judge’s single season home run exploits.

Tygart believes baseball has put in place an “outstanding policy that really knocks it out of the park” on the elements that he says create a “Matrix of Effectiveness.”

According to MLB, there were more than 1,400 Major League drug tests in 2003 and approximately 12,000 this year. All players now are tested, and randomly.

It didn’t happen, but fans on the road, and certainly in St. Louis, will keep turning out to watch one of baseball’s great late season chases.

Or whatever Albert Pujols wants people to call it.

Albert Pujols of the St. Louis Cardinals is chasing history in his pursuit of 700 career home runs. Only three other players have ever done it. He has 698 (and counting).